Extended Life and Times of an Oxy-Fuel Furnace

Collaboration between companies leads to successful projects. One such project between TECO and a customer had led to an oxy-fuel furnace operating successfully for 17 years reports Brian Naveken.*

Collaboration is synonymous with outstanding leadership and teamwork. Companies that work collaboratively benefit from greater resource access, communication and trust. It is also the key to innovation and innovative practices and is the cornerstone of Design-Build projects. The bottom line is, companies that work together closely during a project and furnace campaign are more successful. One such project is an oxy-fuel furnace producing glass tubing which is currently operating into its 17th year of continuous operation. The following is a timeline or diary of the lifecycle of this furnace.

Design based on total cost of ownership - 2003

A project defines the relationships, roles and responsibilities of the design, engineering and construction team required to provide the realisation of a glass furnace from concept through shutdown. Originally, one of our clients was operating a TECO double square all-electric melter, to produce glass tubing. The client contacted TECO prior to their next rebuild scheduled for 2004-2005. Discussions on the rebuild centered on whether to rebuild the existing electric melter or build a new 200 USTPD oxy-fuel furnace with three new Zedtec forehearths. The rebuild was also to include converting the forming method from a Danner to a Vello process to increase productivity of tubing manufacturing necessitating an increase in the glass line elevation. A new oxy-fuel furnace would involve batch plant modifications, building modifications, an emissions system and an oxygen farm. With all of these changes considered, higher quality, higher yield target and a 10-year versus four-year life, an oxy-fuel furnace was selected to achieve the lowest Total Cost of Ownership.

Construction on the furnace and forehearths began September 1, 2004 and was completed in 140 days, within budget and on schedule, using the Design-Build project delivery method. The existing TECO electric furnace was decommissioned on November 21, 2004. 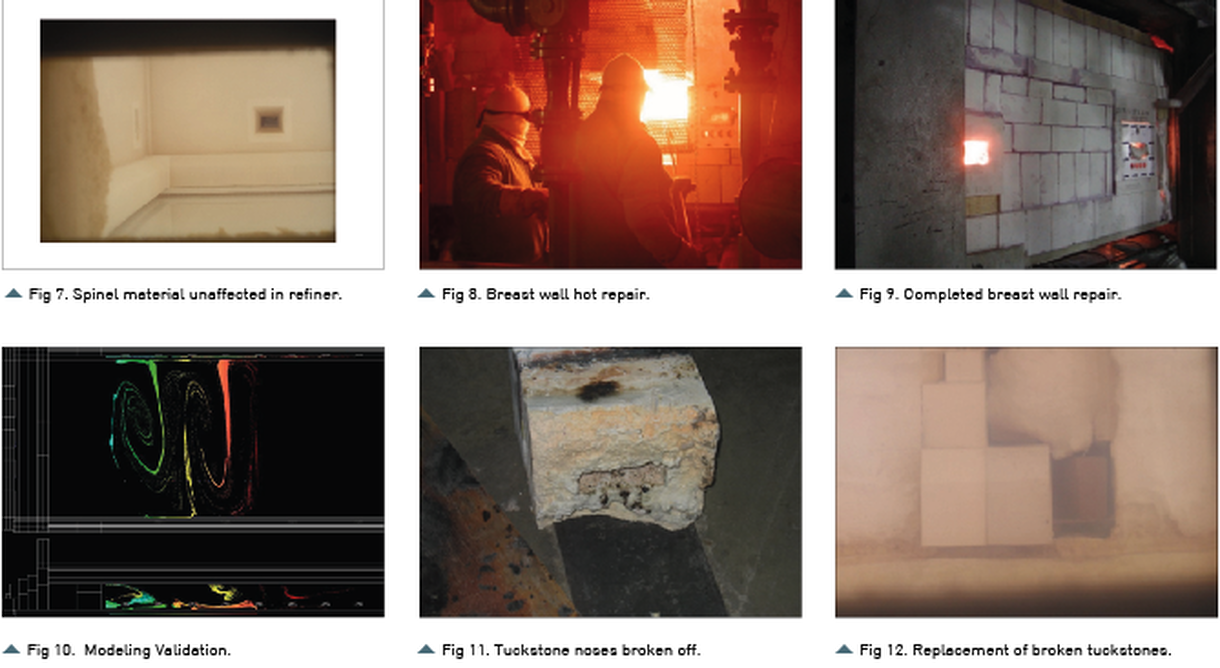 Commissioning and heat-up of the furnace and forehearths began on January 7th. On January 19th, packed glass tubing is being produced at the initial target of 176 USTPD. In May, the pull rate is increased to 191.1 USTPD. The first TECO furnace audit is scheduled for six months from heat-up and twice per year thereafter.

The breastwall in the melter section of the furnace experiences severe degradation due to the use of decrepitating dolomite in the batch. During the design phase of the project, the client wanted to use a spinel material as the hot face material in the complete furnace superstructure, including the crown. Due to the lack of production proven experience with this material and its use in critical areas, specifically the crown, the spinel material was only used in the breastwalls and frontwall. The crown was constructed of fused cast AZS and Alpha Beta Alumina.The spinel material results in being a great material for this glass type except for areas experiencing batch attack due to the dolomite being used (Fig. 6). As a result, the melter (the refiner was not affected, see Fig. 7) breast walls and tuckstones needed to be replaced and a hot repair was performed. The spinel material was replaced with a bonded AZS.

TECO performs a series of CFD models. The results of batch dust particle trace, Fig 10, validates the impingement of the batch on the breastwall.

The first overcoat of the furnace is performed by Dreicor.

During this time, hotspots are identified in various locations on the tank walls. After the overcoat materials were applied, a water cooler is added to all the hotspot locations, and flux line water coolers are also added.

Furnace output is increased when a fourth ZEDTEC forehearth for smaller diameter tubing production is added, which increases the maximum pull up to 215 USTPD. The TECO design furnace is able to achieve output above the nominal design of 200 USTPD.

A second tuckstone repair is undertaken in the melter section due to the noses of the tuckstones falling off (Figs. 11 & 12) after the hot repair, which exposes portions of the mantle plate steel.

The throat is overcoated by Dreicor using a chrome material. The downcomers on both sides have begun to show wear with some resultant instability. Bracing and grating is added to the top third of the downcomer.

The furnace reaches its normal rebuild time and it is still running exceptionally well with no major repairs needed. As a result of the furnace age, the client is increasing the TECO furnace audits from two times per year to three times per year.

Dreicor overcoats the furnace for a second and last time. A third overcoat will not be possible as it would expose too much of the mantle plate steel. Note: Utilising continuing improvement philosophy, the TECO 2003 design has now been changed to allow for three overcoats.

The target wall of the right exhaust port was overcoated (Fig. 13).

The connection between the downcomer and the flue has become compromised at the lintel arch (Figs. 14-16). The repair is accomplished from the inside. The furnace pressure and operation is adjusted to manage the reduced flue opening.

Forehearth 1 is shut down and gated off due to reduced demand for larger diameter tubing. Furnace pull is reduced correspondingly.

The mantle plate is beginning to be exposed due to the wear and degradation of the side wall blocks at the flux line (Fig. 17). As a precaution, the glass level is reduced to prevent any possible glass leaks. 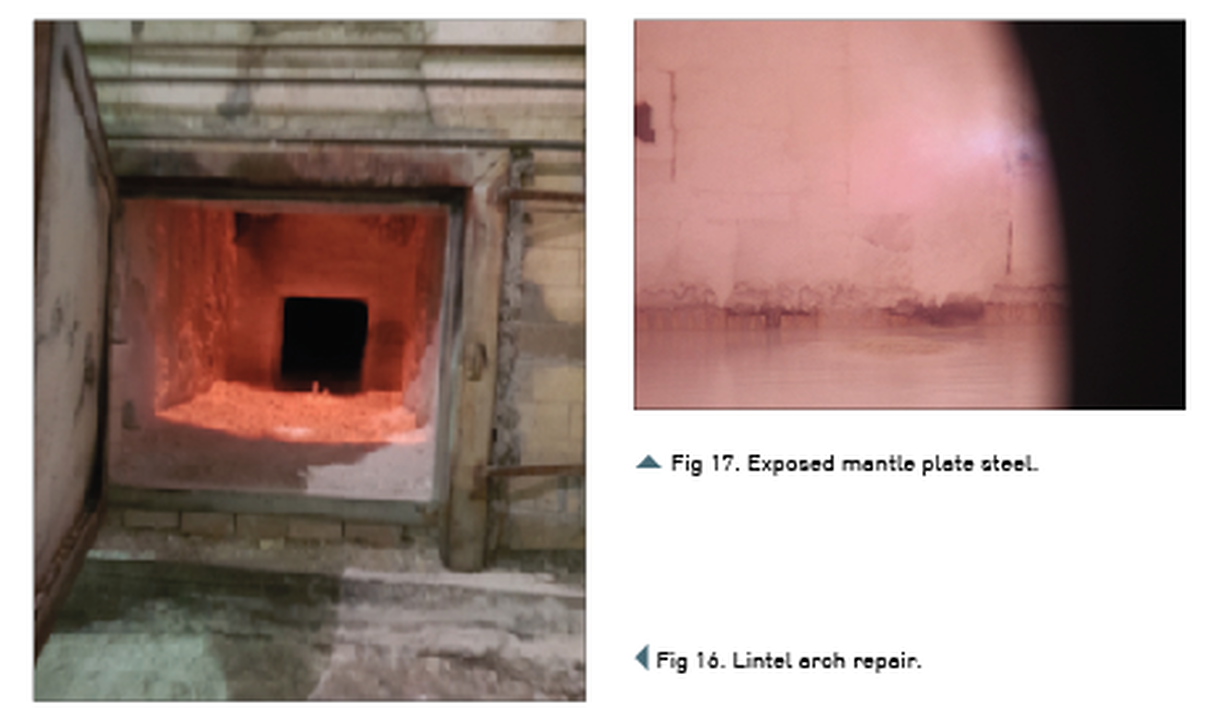 As of this writing, the furnace is still operational.

It is remarkable that an oxy-fuel furnace has reached a 17-year lifetime, considering the batch problem issue with the superstructure within the first two years of operation. The credit for this accomplishment is twofold. One is the outstanding teamwork between management, engineering and operations personnel and their diligent commitment to preventive and routine maintenance, enabling the client to reach its production goals.

Second, is the collaboration between the client and TECO over the lifetime of this furnace on these key points:

The client was proactive. They self-monitored and maintained areas identified by TECO audits, taking care of any issue before they became a problem.

The client asked TECO to complete timely furnace audits two times per year starting in year one of its campaign, and then going to three times per year after the furnace had reached its normal design lifetime. The value of adherence to the audit report recommendations by TECO that were followed faithfully by the plant cannot be overstated.

The client collaborated with TECO when planning all future work and repairs, such as adding an additional forehearth, adding water coolers, performing ceramic welding and the timing on all overcoats. A design–build contractor such as TECO, is a team member throughout the entire furnace campaign, and part of the success of this overall team. 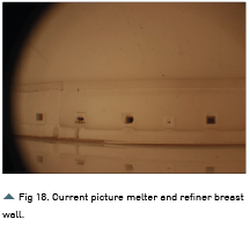 The TECO Group has been designing, building and modernising for the world’s primary glass manufacturing industry since 1927.