The technology at the heart of O-I Expressions 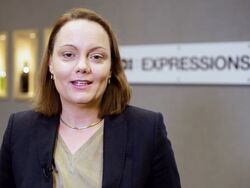 O-I Expressions has unveiled the decoration technology that enables direct printing on to glass bottles.

O-I Expressions was launched last year and enables direct to glass digital printing. It has already received awards for its approach to digital printing, which enables customers to create a more personalised and customised glass package.

At the heart of the process is digital printing technology from Dekron, a subsidiary of the Krones company. O-I, Krones and Dekron have been working together to develop the technology for the past seven years.

The Krones subsidiary specialises in direct digital printing on containers. Once the technology was ready, it supplied a printing machine to the Chazelles-sur-Lyon site.

The machine pre-treats and then prints the glass bottles at speeds ranging from 500 to 100 bottles a minute, depending on bottle size.

Melianthe Leeman, Director of the Global Innovation Platform at O-I, said O-I Expressions was an important step in allowing customers to differentiate themselves in a competitive packaging environment.

“The feedback so far from customers has been overwhelmingly positive. Customers love it when they see it, they have to see it and then touch it. They can see the potential the technology offers and the tremendous possibilities.”

The technology is still in the incubation stage with more developments expected in future years.

The technology was first highlighted to O-I during a visit to the glasstec trade show in 2012. Digital printing was becoming popular within other packaging and O-I was keen to make inroads into the personalisation of glass bottles. O-I Innovation Manager Olivier Dangmann and O-I staff met the German start-up Till at the trade show, which was displaying an early version of the printing machine. O-I agreed to subsequently invest in a prototype printer and to conduct further tests. Although Till was later acquired by Krones, work on developing the technology continued between the partners.

O-I made a breakthrough during the testing phase – it discovered a way to do 3D printing on glass. It is hard to print on a glass 3D shaped container compared to other materials due to the complex adherence of the inks.

After further tests O-I was convinced to invest in an industrial-scale line. 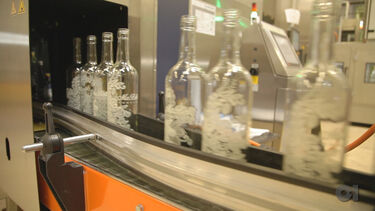 The machine was installed at the Chazelles-sur- Lyon facility in April this year and after a six-week engineering programme, the official start-up took place in August.

Melanthie said: “Other technologies have copied the screen printing process, this one is designed specifically for digital printing and has the potential to significantly step up the speeds of printing over time once you work on the technology.

“Direct printing onto glass is an additional offering in the decoration space, to offer more design options, more variable prints and more speed to market for customers.”

While the technology is still in its early stages, it could eventually lead to the elimination of all labels from bottles. 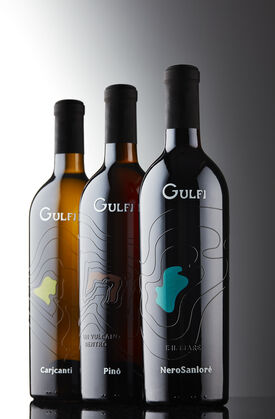 “Krones has made this part of its labelling business so I think it shows its intent that this could, after long term development, replace labels altogether if you get filling line speeds upgraded.

“It has plenty of potential and it’s still early days and we need to test and see where it eventually will sit, whether it will stay in the decoration space and maybe replace pre-printing or evolve to become something more than just a decoration solution.”

The printing machine uses CMYK colours, which covers 80% of the pantone spectrum. While there is an option to install two more printing heads in order to have six-colour printing, customers so far have been happy with 80%.

Bottles to be decorated include water, wine and spirits.

“The technology really fits with personalisation and premiumisation trends but to me we are only scratching the surface of what is possible for premiumisation. We will start seeing tailoring your bottles for specific outlets such as bars or disco, or could make them retail specific, or make it really individualised and make a unique packaging experience to a consumer – there a lots of options to explore.

“We are at the incubator stage of this technology. It depends on how the cost of operating evolves but we have a technology adoption curve and digital printing on glass is the introduction phase and we expect to see lots of technology and evolution over the years.”

Bottles have so far been shipped to customers all around the world, from Europe to China and the USA. O-I chose the Chazelles-sur-Lyon site for the project because of its proximity to the Till engineering site in Germany.

The Expressions team worked with Till to develop the technology for glass applications. An R&D team based in Chazelles-sur-Lyon was focused on digital printing, so they were able to continue the development process.

The site is also close to O-I’s European headquarters in Switzerland for extra advice. In addition the French team were fully familar with decoration production processes and projects.

Once the decision was made to install the line, all of the site’s 24 staff were given training in the digital process.

“It means a digitalised workflow for the designers and training on software to help us make sure everything related to this operation is digitalised.” The next step will be to develop the technology further and to add an additional line, with the USA the next possible location. ?