In a celebration ceremony on Wednesday the glass packager lit the Sorg end-port furnace, which has three production lines.

It has increased the total capacity of the facility to 2200 tonnes per day and approximately 9.5 million bottles a day.

The company manufacturers Corona and Modelo beer bottles which are filled in a plant next to the glassmaking facility and then distributed to the USA.

Furnace 5 will manufacturer Modelo Especial bottles in flint to begin with, but has the capacity to manufacture in amber colour in the future. 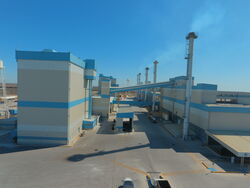 Speaking to Glass International in an interview to be published in the March issue, IVC Expansion Director Luis Lema said he was incredibly proud of his team.

He said: “I have been blessed to have the opportunity to work with such a talented team. They are very professional people, being able to accomplish this job here on site.

“This has been the project of my life. We’re not just putting bricks and machines together, we’re building a glass cathedral."

Sheppee International, Zippe, Pneumofore and Strutz have also supplied technology to the site.

IVC is a company between glassmaker O-I and brewer Constellation Brands.

Production line at the IVC site in Piedras Negras

The IVC site manufactures glass bottles for the Corona and Modelo brands, which are distributed to the USA. This is footage taken from the site.